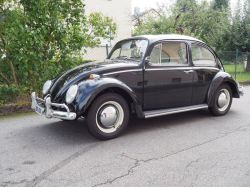 This VW Beetle from 1965 scores with a large number of superlatives and should be pretty much unique.
Since it was first registered, it has only been moved 40,893 km. From a total of 2 owners. It is in top original condition, has zero corrosion and even has the original cardboard cover.
At that time it was ordered with a steel sliding roof as an optional extra.
In 1984 it got its current color, missed by the second owner. Originally delivered in pearl white, the new owner decided to repaint the car as he only used black cars.